Just over 6 years ago, Lumines debuted on the original Sony PSP console as a launch title developed by Mizuguchi Tetsuya, probably most known for Rez and its spiritual successor, the recent Child of Eden game. Fast-forward to present day and Q has returned with the latest game in the Lumines series, Electronic Symphony, for the PS Vita. 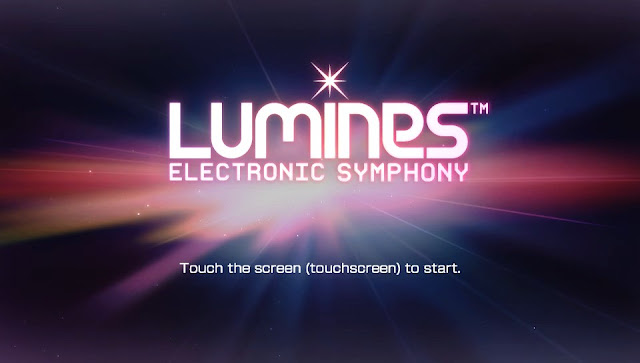 Upon starting the game, you’ll be greeted with the menu, where you can select to play one of the various modes available. The main game mode, voyage, allows you play through all the skins in the game’s tracklist back to back.The core aim of the game still remains the same as always, you use the falling blocks to match squares of the same colour, which are then cleared as the time slider scrolls past the screen. As you complete each skin, you unlock it and can then add it to a custom playlist in the returning playlist mode. The first few skins in voyage mode start off rather easy, with the difficulty gradually increasing the longer you manage to continue playing without any blocks reaching the top of the screen. This is definitely useful for new players, so they can get accustomed to playing the game, but veterans may find it takes too long to get to a difficulty level which would challenge their abilities.

So, for players looking for more of a challenge mode, Master mode gives you 5 ‘zones’ of increasing difficulty and speed, which you can play through in sequence, or select a specific zone once you’ve unlocked it. Stopwatch mode is included as a simple time-attack mode where you need to clear as much blocks as you can in 30,60,180 or 300 seconds. Multiplayer is also included in the form of the Duel mode, where you can play other Lumines players via the Ad-hoc connection. 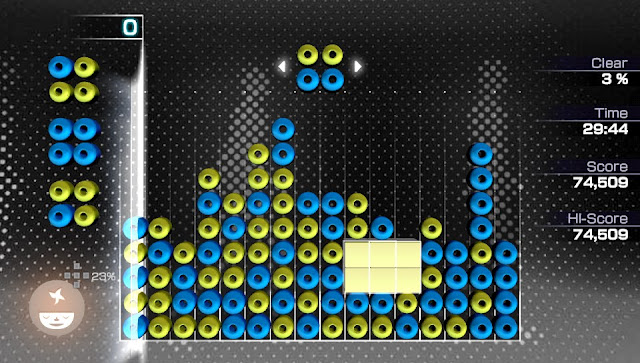 To keep ES from being a simple rehash of the previous games, several new features that have been introduced to the Lumines series. The main addition, the Experience System, keeps track of the scores you get in each of the game modes and awards you XP. as your XP bar fills and you level up, new skins and avatars are unlocked. This feature will be very useful for players who want to get some of the later skins in voyage mode but cant survive long enough to reach them.
The avatars that you select now can provide you with abilities you can use in game to help you clear blocks or to hinder your opponents when playing multiplayer. Each avatar has 2 abilities, one for single player and the other for multiplayer, with over 40 different avatars available to unlock. While the addition of avatar abilities isn’t a game-changing feature, it can definitely be useful when you have a pile of blocks nearing the top of the screen and need something to deal with them quickly. This can also be said about the ‘Swap Block’, another new in game feature, which will randomly swap the colours of all the connecting blocks when it is placed. If you’re lucky it could even create a large chain of blocks once it’s swapped the colours around.

One unusual addition to the game is the “world block”, which is a block of 2 million squares, which gets reset every 24 hours. During every 24 hour period, all Lumines : ES players are tasked with clearing this block by contributing squares. This is done automatically when you clear squares in the single player modes while connected to the Internet. This isn’t essential, but contributing to this will award you with bonus XP, which can help you unlock that next skin or avatar.

While the core game hasn’t been changed a great deal from the original, Q Entertainment have imbued Electronic Symphony with several new features to enhance the experience for old and new players alike. Playing Electronic Symphony on the PS Vita with the vivid colours and backgrounds, as well as the new 3D blocks, looks absolutely stunning on the 5” OLED screen, while the catchy soundtrack will always keep you coming back for more. If you want to be fully immersed in the experience, a good pair of headphones would be a wise choice indeed.